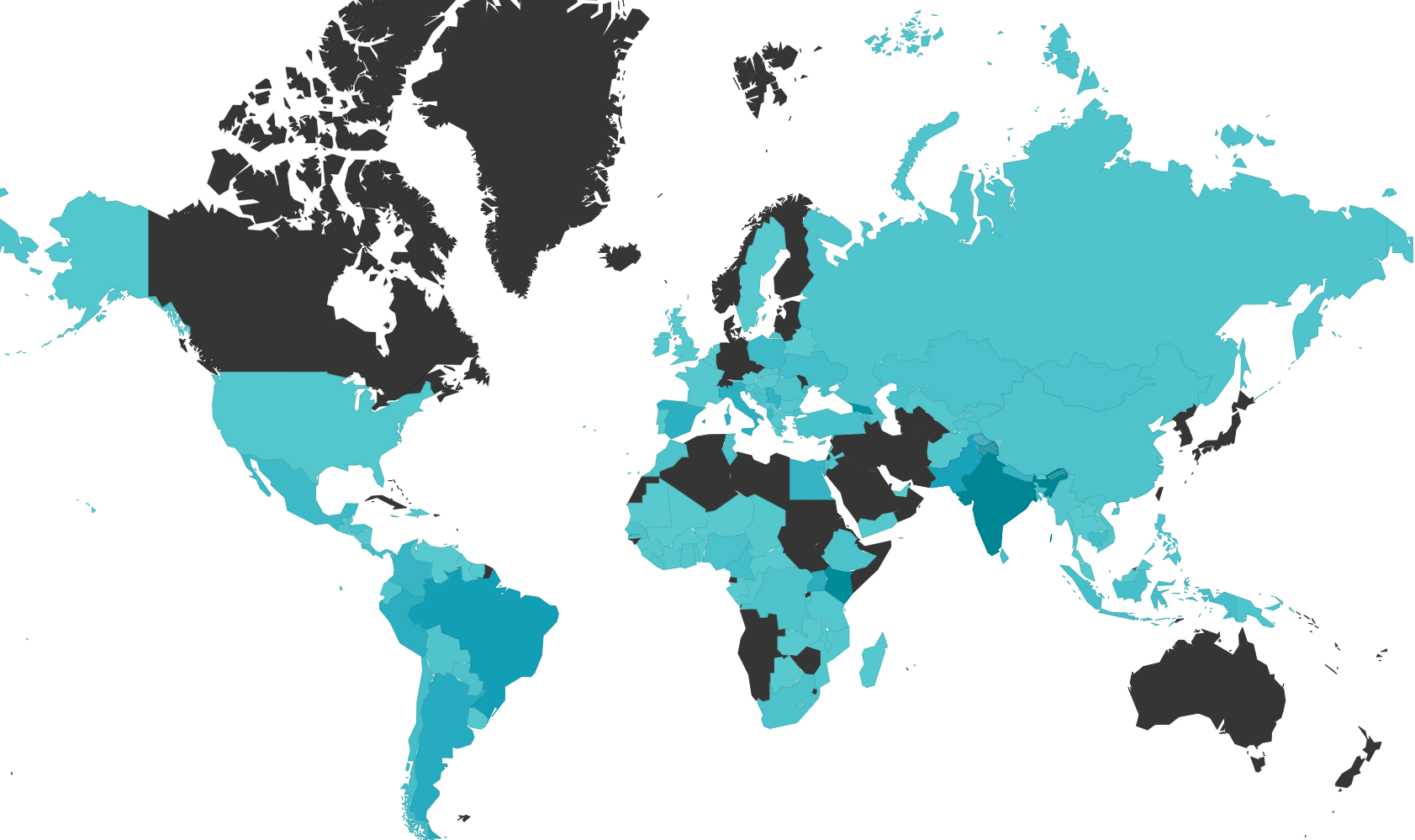 Why are investment flows in the Middle East and North Africa not being matched with commensurate community complaints? And what does this tell us about communities' ability to access remedy in these "dark spots"?

The Accountability Console complaint map displays complaints and their countries of origin, allowing users to identify regional concentrations of complaints. For example, we can see a large number of complaints in Brazil, Georgia, Kenya, and India, with over 50 complaints in each country. But we can also see which countries and regions appear to have few or no complaints. The critical question we address is: how should one understand these concentrations and dark spots? Are more complaints in an area a sign of more widespread problems (a bad thing) or simply more civic engagement (a good thing)? An analysis of console data shows that there is likely a problem in many of these dark spots, where investments are causing harm that is unaddressed by grievance mechanisms. This is a ripe area for further research and evaluation.

Low complaint volume may simply be due to a low prevalence of internationally financed projects about which a complaint could be filed, or a high prevalence of internationally financed projects and few or no complaints. Many reasons leading to this second scenario are possible, including harmed communities lacking information (about projects and accountability options), experiencing language and other barriers to engaging with a complaint office, silencing of community dissent through violence and intimidation, or lacking civil society support to help bridge any number of additional barriers that communities face, to name a few.

Although there are "dark spots" scattered throughout the world, the region with the lowest relative complaint volume appears to be the Middle East and North Africa.

This kind of regional absence occurs almost nowhere else on the map. And while the East Asia & Pacific region also has multiple countries with no complaints, they are mostly confined to relatively small pacific island nations. Only in the MENA region are large countries with millions of inhabitants and billions in development financing completely devoid of complaints. In order to make sense of this discrepancy in complaint representation, we can compare complaint data to total project volume in each region.

Does Underinvestment in the MENA Region Explain it All?

Given that regional banks may introduce other externalities that skew our dataset, we limit the following analysis to only World Bank (source) and IFC (source) project data, to ensure equitable comparability across regions.  Counting only projects started after the establishment of an accountability mechanism (1994 onward for the World Bank and 1999 onward for the IFC), the MENA region received the fewest number of projects, with the smallest total dollar amount, of any region. However, even accounting for this discrepancy, the MENA region has the lowest proportion of complaints relative to project volume, averaging only one complaint for every 87 projects, while the average across other regions is one complaint for every 47 projects. Looking only at eligible complaints, the difference is even more stark: Only one in every 164 projects in the MENA region receives an eligible complaint, compared to an average of one in every 82 projects in other regions, more than double the proportion received in the MENA.

Figure 2: Percent of Projects with Complaints, by Region

It is fair to assume, then, that lack of funded projects is not the full explanation for why the MENA has the fewest number of complaints of any region in the world. It is possible that MENA projects are simply safer, more carefully planned, more careful to follow World Bank Group safeguard policies, and more willing to incorporate community consultation, resulting in less community harm. But there is little reason to believe that the same banks would conduct themselves so differently in one particular region, and past research shows that harms from IFI-financed projects in the MENA region may well be prevalent.

Why are communities in the Middle East and North Africa unable to access remedy through accountability mechanisms?

There are several reasons that warrant consideration as to why the citizens of a state might find themselves unable (or in some cases, unwilling) to submit a complaint. First, the clear existence of an active civil society is typically necessary for those affected by development projects to have the knowledge and resources required to submit complaints (stay tuned for a future newsletter article on this). But the presence of civil society is not static and can be impacted in complex ways by issues such as political unrest and conflict. The "Arab Spring" may represent a particularly salient case here, where a brief period of protest and unrest resulted in a diminished capacity of states to repress independent civil society initiatives (2011-2012), followed by a prolonged "counter-revolution" in which the state reasserted control (2013 onward). Accountability Console data indeed shows that multiple MENA countries — Israel, Palestine, Tunisia, and the United Arab Emirates — filed their first complaints in 2011 or 2012. In 2013, the number of annual complaints fell to pre-2008 levels, and didn't exceed two complaints per year until 2016.  There may be many reasons for this, but limited civil society freedom is certainly a strong possibility.

What IAMs Can Do When Dark Spots Indicate Accountability Gaps

In order to mitigate the lack of access and resources that some communities face, IAMs should be given the ability to take concrete steps to center the needs of the community in potentially repressive contexts.  For example, IAMs could guarantee the anonymity of those who submit complaints. The mechanisms could review all current investments with particular risks to human rights defenders, and ensure that project-specific risks are mitigated.

Contractual provisions can be used with authorities, clients, and other stakeholders to create a safe environment for defenders and community members. IAMs should also establish a clear response plan in the event that dissenters or defenders are met with retaliation from authorities or clients. Civil society organizations such as the Coalition for Human Rights in Development have published extensive material on threats to communities and human rights defenders rooted in development and development finance. IAM policies on response plans and mitigation efforts have been produced by IAMs such as the IFC's CAO, the GCF's IRM, and the IDB's MICI. It is vital that accountability mechanisms have the capacity to take these and other concrete steps to ensure that communities know about and can safely access accountability resources, and to strengthen access in dark spots as seen in the MENA region.

"Dark spots" are clearly identifiable in the Accountability Console's complaint data, nowhere more so than the Middle East and North Africa. Though the reasons for the absence of complaints in these countries and regions requires more research and analysis, it is nevertheless clear that communities are not able to adequately seek remedy through accountability mechanisms. The problem is particularly insidious because it stems from a lack of data, a problem not easily seen or understood, let alone addressed. IAMs, advocates, and civil society groups should be encouraged to double down on efforts to identify dark spots, focus outreach events in those areas, and develop appropriate safeguards and policies, so that those who have been most excluded can become proactive beneficiaries of IAM engagement.